Back to Square One: My Journey Into Competitive Ski Racing

I hate to say it, but I was a basketball kid. From the age of seven on, I spent my winters in a crowded and sticky gym, running back and forth trying to get a ball into a tiny hoop…and I loved it. However, when I started at the Math and Science Academy in sixth grade, a girl's basketball team was nonexistent.  My parents and I worked with the school athletic director to put together a team, but even though we were successful in doing so I found myself being pulled in a different direction.

In addition to basketball, I played softball in the spring and summer and soccer in the fall. However, neither of these were offered at MSA either. Three sports my school did have, however, were cross country, nordic skiing, and track and field. I hated running, but reluctantly joined track at the end of my sixth-grade year because the team seemed super fun. It ended up not being so bad, so I continued to run over the summer with my friends and found myself in the sport of the cross country.

When I started to feel the peer pressure from my cross country teammates to quit basketball and join nordic I was pretty stubborn. It was too late to start a brand new sport in eighth grade, and unlike the sports, I had been doing my whole life, I would have to start from square one. But my friends and head Nordic Ski Coach Alex Brault didn’t give up on me. The winter of my seventh-grade year while I was still playing basketball, I was invited out to a few ski events, one of which I was lent a pair of skis to try out skiing for the first time. It wasn’t pretty, but I decided that the next winter I would give the ski team a go. 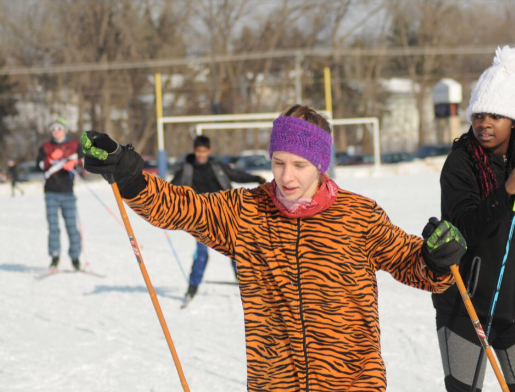 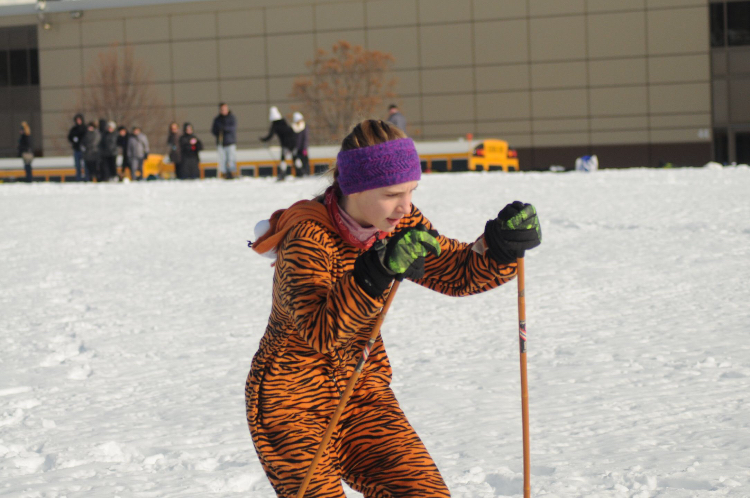 My first experience with skate skis at the annual costume race

At the beginning of my first nordic season, our coaches asked us to set goals for the season. I had hardly touched a pair of skis, didn’t know the difference between classic and skate and thought skiing on concrete parking lots was the way to go for getting your skis from the car to the ski trail. Even so, ambitious fourteen-year-old me decided I wanted to qualify for state that year, but I didn’t tell anyone because I thought they’d tell me it was unrealistic.

Team picture before my first ever classic race (I found out afterward that striding is for uphills and double poling is for flats, not the other way around…oops) I threw myself in with a few friends on the team who had been skiing since they were young (shoutout to Karen and Aria). They, as well as other experienced skiers on the team, weren’t afraid to nicely yell at me for skiing with my poles straight out to the side or the other interesting skiing technique I seemed to have invented. I knew that if I wanted to not only keep up with them, but also qualify for the state meet, I would have to take my skiing to a new level. 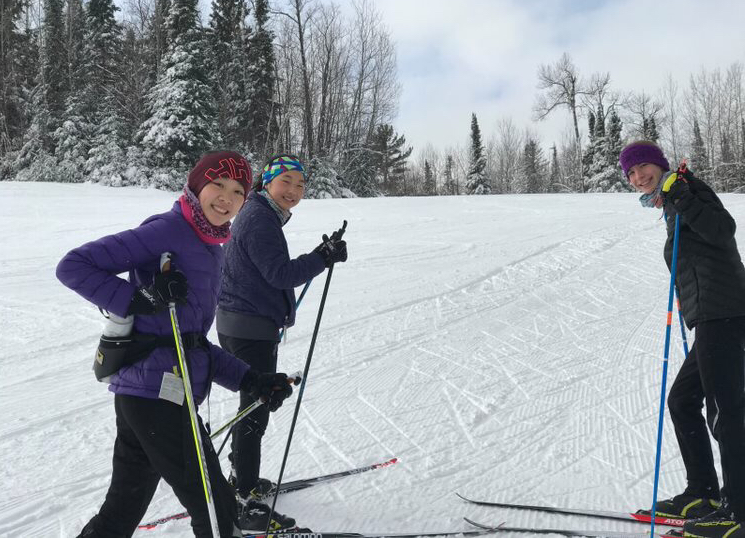 Aria, Karen, and I at the Giants Ridge Ski Trip. We skied pretty much all day long for the three days we were there trying to hit 100 kilometers

If there's one thing that I learned that year, it’s that in order to have any sort of success in something, you have to love it. I loved being able to push myself and see what I was capable of, and I loved the whole ski community. I learned that if I was going to get better, I would have to fall a lot, laugh at my mistakes, stay patient when things weren’t going smoothly, and ask questions about anything and everything. From the start, skiing was a challenge, but it was so new and so fun that I wanted to spend every second I possibly could on snow. In the end, it was the countless hours spent gliding through the woods with my teammates, talking and laughing so hard we forgot we were even skiing, that got me to the state meet that year. Qualifying for state was very exciting, but little did I know that it would present a whole new set of challenges.

A lot of falling and a lot of laughing, a lot of kilometers, hills, and technique work 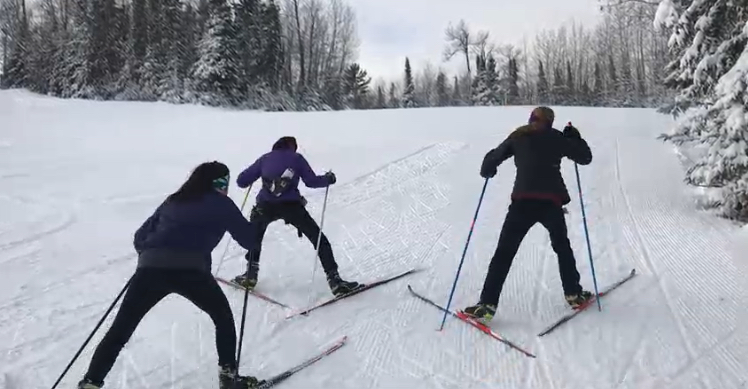 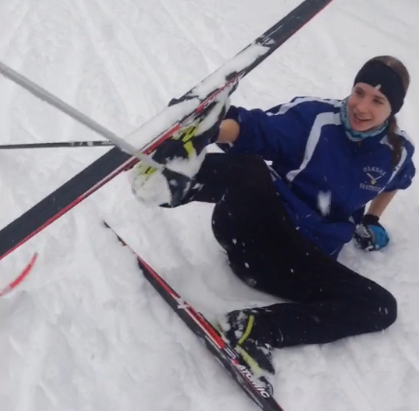 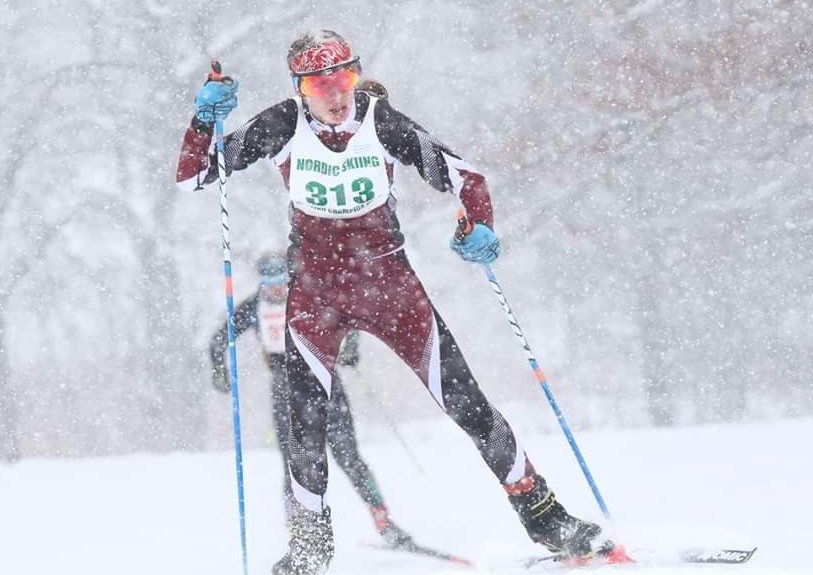 Partway into the skate race, coming across the top of Triple Threat, a three hill sequence on the Silver course, my heart rate spiked and vision blurred. I knew something wasn’t right but was determined to finish the race anyway. I honestly don’t remember much after that, with the exception of the final hill on Silver where I physically could not ski any longer. I will never forget the atmosphere on that hill, the complete strangers who cheered me “one step at a time” to the top, and the tired girls passing me in the race who somehow found the energy to offer words of encouragement. It reminded me why I love this sport that could sometimes be so gruesome: no matter what team you are on or what level you are at, everyone is rooting for each other. Slowly but surely, I made it to the finish line. I don't remember much from the classic race either, but it’s safe to say it didn't go well. I finished the race pretty close to last, but I had finished. Over two hours after the race concluded, I was still dizzy and my heart rate was just starting to come down from over 200bpm. I knew how hard races could be and the exhaustion that followed, but something about this just didn’t seem right.

Back To Square One

“Heart condition” was not a diagnosis that I, nor anyone close to me, was expecting. However, to me, it almost came as a relief. Since I was such an active kid, I was always left confused as to why I was experiencing these unusual symptoms. An EKG test that I took the day after the state meet, along with a series of others, revealed that I had Wolff Parkinson White Syndrome (WPW). WPW is a rare condition where an extra electrical pathway in the heart causes episodes of rapid heart beating or supraventricular tachycardia.  I won’t bore you with the details of it, but after a series of more tests, I was told I would need heart surgery. Until then, it would be too dangerous to do any kind of physical activity.

At that moment, my ambitions in skiing and running seemed to be shattering. There were a lot of unknowns for what my future would hold, but all I could do was wait for my surgery date and support my teammates as they crushed workouts and prepared for the first track meets of the season. Some get-well-soon flowers sent by family!

The surgery went well, and after about five days I was cleared to slowly ease my way back into activities…as long as a defibrillator was close by at first.

I was ecstatic to be able to train again, but I was slapped with the reality that I was back to square one. Running one mile at 12:30 pace had never felt so hard in my life. At first it was frustrating that I wasn’t where I wanted to be, but I decided to focus on one day at a time and celebrate the little improvements each day; I wasn’t going to let this setback stop me from getting to where I wanted to be. That track season I ended up reaching the goals I had set prior to knowing I would need surgery--qualify for my first Class A state meet and set new PRs in both the 1600 and 3200!

I didn’t start to focus on ski training very much during the off season until last summer when I began with MSC. The ability to get to know and train with amazing coaches and athletes from around the Twin Cities and beyond propelled my skiing to a whole new level. I realized that the top skiers weren't crazy super human robots- just very hardworking, consistent, and smart about training! Oddly enough, the more hours I put into skiing, the more I seemed to get out as well. 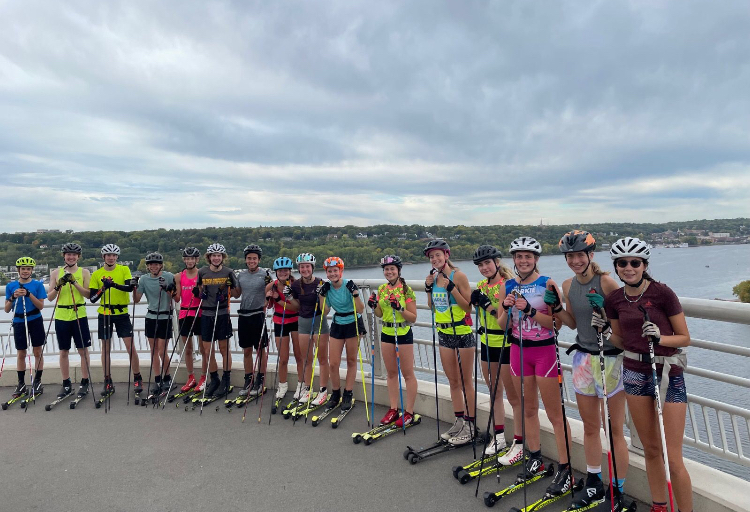 If I could talk to myself from five years ago, I would tell myself that it doesn’t matter how old you are, or what challenges and setbacks you face--when you go back to square one, it means you are ready for a whole new world of opportunities! Don’t be afraid to set “unrealistic” goals, believe in them, and work really hard to achieve them. However, no matter how hard you work or how smart you are with training, progress isn’t a straight upward slope. Whether that success line is trending up or down in the moment, be patient, enjoy every second of the process, and make some lifelong memories!